Start a Wiki
Cinderella is another fairy tale princess who is the main character in Winnie the Pooh Meets Cinderella. In the movie, Winnie the Pooh and his friends help her go the the ball and win the heart of the Prince and keeping her away from her evil stepmother Lady Tremaine.

Cinderella, originally known as Ella, was the daughter of an aristocratic couple who gave her every luxury and comfort. Soon, her mother died from an illness. Her father, believing she needed a mother's love, married Lady Tremaine, who has two daughters about her age Anastasia and Drizella. However, after her father's death, Lady Tremaine reveals herself to be a passive-aggressive tyrant who is jealous of Ella's beauty. She, her daughters, and their pet cat, Lucifer abuse and mistreat Ella, ultimately forcing her to become a scullery maid in her own home and renaming her Cinderella. She is notable for being silenced repeatedly by Lady Tremaine, creating the assumption that Cinderella is expected to do chores without speaking out. Her only friends around the chateau are the mice (especially Jaq and Gus), the birds, Bruno the dog, and Major the horse.

One day, Cinderella receives an invitation to a royal ball at the King's Castle. She immediately delivers it to her stepmother, who tells her she can go--provided she finishes all her chores and is able to find something suitable to wear. After thanking her stepmother, she goes back to her room, where she shows the mice and birds a dress that had belonged to her late mother. She is about to begin fixing her dress when she is unexpectedly called downstairs by her impatient, needy stepsisters. The mice and birds, feeling sorry for her, take it upon themselves to repair the dress for Cinderella. Jaq and Gus find a sash that Anastasia doesn't want anymore, as well as some beads thrown out by Drizella, and take them to help fix the dress.

Later that night, Cinderella sees a carriage outside the chateau through a large window. She goes to inform her stepmother that a carriage has arrived to take them to the ball. When Lady Tremaine notices that Cinderella has not yet dressed for the event, Cinderella replies that she is not going, to which Lady Tremaine points out that there are other times Cinderella will be able to attend while smiling wickedly about Cinderella not going. Cinderella walks back to her room and looks out the window toward the castle, wondering what a royal ball will be like. Just then, her bird and mice friends reveal a surprise: they have fixed the dress for her. She thanks them for showing how much they care for her, changes into the dress, and rushes downstairs to join her stepfamily. However, when they see Cinderella, Lady Tremaine compliments her dress and points out Drizella's beads. The stepsisters then fly into a rage and furiously tear Cinderella's dress apart.

Cinderella arrives at the castle while the ball is still in procession. She walks upstairs to the castle's ballroom, where she attracts the attention of Prince Charming, who is enchanted by her sparkling appearance and walks over to her. He escorts her to the middle of the ballroom, and (surrounded by other maidens in attendance) the two begin to waltz. The two then have some private time together (courtesy of the Grand Duke), during which they become completely enthralled with each other and are about to kiss, but then the clock begins to strike midnight, prompting Cinderella, who has lost track of time and also has not realized at this point that she has been dancing with the Prince himself, to leave abruptly, realizing that the Fairy Godmother's magic is about to end.Cinderella is left with her dress reduced to rags as her stepmother wishes her good night before leaving for the ball with the stepsisters. Realizing that now she cannot go to the ball, she bursts into tears and runs outside to the garden, with the mice, Bruno and Major following her in sadness. She throws herself onto a bench and begins sobbing at the apparent loss of her dreams. Shortly thereafter, the magical Fairy Godmother appears to comfort Cinderella. She insists that Cinderella attend the ball and demonstrates her magical abilities as she transforms a pumpkin into a coach, mice into horses, Major into a coachman, and Bruno into a footman before transforming Cinderella's ragged dress into a beautiful, sparkling ball gown, complete with glass slippers. The Fairy Godmother warns Cinderella that all her magic will be undone at the stroke of midnight. Cinderella thanks her, jumps into the coach and sets off for the ball, waving goodbye to the Fairy Godmother.

Meanwhile, at the castle, the King has ordered the Grand Duke to search all over the kingdom for whoever can fit the slipper, the only clue of the mysterious maiden. Back at Cinderella's chateau, Cinderella has resumed her duties of a maid. As she walks upstairs, carrying breakfast for Anastasia and Drizella, she overhears Lady Tremaine telling Anastasia and Drizella about the news of the Duke's search for the girl who has lost a slipper at the ball last night and whom the prince is madly in love with, causing Cinderella, upon realizing that handsome man she danced with was Prince Charming, to become so distracted that she drops their breakfast in the process. As she cleans up the mess (ordered by Lady Tremaine), she overhears Lady Tremaine continuing to tell her daughters that the girl who can fit the slipper will be the prince's bride, making Cinderella smile dreamily, even when her stepsisters stack clothing in her arms, the sight of which makes them suspicious of her peculiar facial expression.As she runs down the stairs, she inadvertently drops one of her two glass slippers; nevertheless, she jumps into the coach and leaves the castle. At the clock's twelfth strike, the spell breaks, reverting everything back to what it was. After running behind the bushes to hide from from the palace guards (summoned by the Grand Duke) who gallop past the pumpkin (smashing it in the process), Cinderella, once again in rags, apologizes to the mice, Major and Bruno for forgetting the time before going over her wonderful time at the ball, including her dance with the Prince. Just as she accepts that it has all ended, Jaq and Gus point out a glass slipper, the only remaining object from the Fairy Godmother's magic, on her foot. Cinderella takes off the slipper and thanks her friends and her Fairy Godmother for everything.

A short time later, the Grand Duke and the Herald arrive at the chateau. While Cinderella sobs in front of the locked door, believing that her dreams of being reunited with the Prince have been lost, Jaq and Gus steal the key to her room from Lady Tremaine. Cinderella hears Jaq and Gus panting up the stairs outside her room and looks through the keyhole to see that the two mice have finally made it to the top, filling her once again with relief and hope, but is again shocked when Lucifer traps Gus inside a bowl, along with the key. She orders Lucifer to let Gus go, but the stubborn cat refuses. When the mice and the birds' attempts to make Lucifer release Gus fail, Cinderella, quickly realizing that Bruno can be the one to get rid of Lucifer, implores the birds to fetch the dog. After Bruno arrives and scares the cat into jumping out of a nearby window, Jaq and Gus wedge the key through an opening between the door and the floor, allowing Cinderella to finally exit her room and head downstairs.Upon hearing that the two have to get dressed in preparation for the Duke's arrival, Cinderella decides that she too must get ready. She puts down the clothes and heads upstairs to her room, singing and humming the tune she and the Prince had sung at the ball. Unknown to her, Lady Tremaine is spying on her dance-like movements, and realizes Cinderella was the mysterious girl who danced with the Prince. Jaq and Gus see Lady Tremaine heading upstairs to the tower and, sensing the danger, rush to Cinderella's room to warn her, but Cinderella is too busy preparing herself to meet the Duke. By the time she sees them trying to warn her, she catches sight of Lady Tremaine at the door (through a mirror), but it's too late, as the wicked stepmother slams the door shut and locks it. Having seen Lady Tremaine put the key into her pocket, Jaq and Gus decide to steal the key and take it to Cinderella's room to free her. Just as the Duke is about to leave, Cinderella calls out to him. Lady Tremaine initially tries to dismiss Cinderella as a mere maid, but the Duke rebuffs her and helps Cinderella onto a chair so that she can try on the slipper. He calls for the Herald to deliver the slipper, but Lady Tremaine trips him with her cane, causing the slipper to fly and shatter into pieces in front of the Duke and Cinderella. As the Duke reacts in horror and terror about the King's reaction, Cinderella reveals that she has the other slipper, which she pulls out from her apron, horrifying her stepmother and stepsisters but filling the Duke once again with joy and hope. He slides the slipper onto Cinderella's foot, and it fit perfectly.

Cinderella, along with the mice, Bruno and Major, are taken to the castle, where she reunites with Prince Charming and becomes his bride and a princess. The King and the Grand Duke happily celebrate their marriage as the newlyweds head downstairs to a carriage that will take them on their honeymoon. As Cinderella walks down the stairs with the Prince, she drops her slipper once again, prompting her to go back for it. The King assists her in putting it back on, and Cinderella gives him a kiss on the head as a way of thanking him. Cinderella and the Prince ride off in the carriage, and Cinderella waves goodbye to her mice friends, who wave back at her. As the carriage pulls away, Cinderella and the Prince share another kiss (with the final words in the book, below the illustration of the couple kissing, reading "and they lived happily ever after forever").

Cinderella may be Lady Tremaine's servant, but she is a dear friend of Pooh, Littlefoot, and Barney

Cinderella and the Disney Princesses in Ralph Breaks the Internet 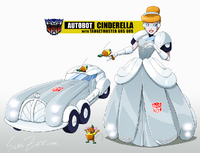 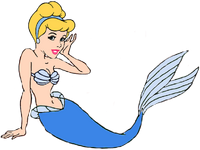 Cinderella as a Mermaid 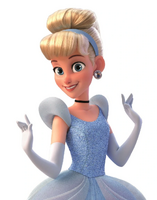 Cinderella in Ralph Breaks the Internet
Retrieved from "https://poohadventures.fandom.com/wiki/Cinderella?oldid=2345841"
Community content is available under CC-BY-SA unless otherwise noted.