Start a Wiki
Jeanette is a chipmunk in Alvin and the Chipmunks series. She is the smartest of the Chipettes and her sisters are Brittany and Eleanor. Her chipmunk counterpart is Simon. 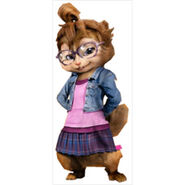 Jeanette in the live-action films.
Add a photo to this gallery
Retrieved from "https://poohadventures.fandom.com/wiki/Jeanette_Miller?oldid=2102068"
Community content is available under CC-BY-SA unless otherwise noted.