Pickles B.L.T is a Lalaloopsy Character. She is the busiest rollerskating waitress in Lalaloopsy Land. She's a fast-talker with no time to spare. She loves to chew gum, call everybody "Sugar", and carry lots of plates at once, even though she sometimes drops them. Her name comes from the key ingredient to her famous signature specialty - the pickles in her very own pickle burger! As well as the delicious B.L.T sandwich Pickles serves to all of her customers.

Pickles B.L.T is a fair-skinned girl with typical black button eyes and bright pink cheeks. Her hair is a brown-orange color worn in the short flare style with curved bangs with few strands of hair curling down and a small parted cowlick. Her hair is worn with sky blue bows.

She wears a black blouse with puff sleeves, blue buttons, parts on sleeves and neck. She also has on a blue skirt with checkered lining and a white apron with black lining. She also wears blue socks with small ruffles and white roller skates with pink lacing and hot pink wheels.

Pickles' pet is a "hot dog" puppy, whose feet are hot pink wheels, matching its hot pink cheeks and red bow on its head. It also has a tiny tail and mustard adorning its back.

Pickles' home is the diner she works at. It appears to be a messy structure with a big diner sign just outside of it, held up with many forks and spoons. She has a picnic blanket set outside, along with a few tables and french fry trees and plants. 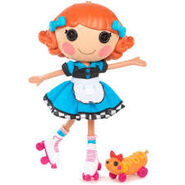 In The New Lalaloopsy Fan Made Series

Add a photo to this gallery
Retrieved from "https://poohadventures.fandom.com/wiki/Pickles_B.L.T?oldid=2345354"
Community content is available under CC-BY-SA unless otherwise noted.