She is voiced by Rebecca Shoichet.

Throughout Equestria Girls, Sunset Shimmer is shown to be mean, short-tempered, greedy, bratty, egotistical, cruel, condescending, manipulative, and dishonest. She frequently insults and belittles others, and thinks little of it. According to human Fluttershy, Sunset makes life miserable for "anyone who stands in her way". As a result, much of the Canterlot High student body is afraid of her. She is also shown to be mainly concerned with gaining power, desperately trying various attempts to get Twilight Sparkle's crown in order to use its magic.

However, she doesn't appear to be willing enough to inflict physical pain on others, or at least not upon small animals (i.e. Spike), claiming she isn't a monster. Despite this, she appears to be easily irritated when someone else is praised in her presence, to the point of being provoked into attacking them.

When Sunset puts on the element of magic, she transforms into a demonic visage of herself. While in this form, she becomes more fierce and goes so far as attempting to dispose of Twilight. After she is defeated by the Elements of Harmony, Sunset Shimmer becomes immediately repentant and apologizes for her actions, appearing to renounce her prior dishonest and unkind ways.

In Equestria Girls - Rainbow Rocks, Sunset Shimmer appears to have completely changed from her old self and started believing in friendship, becoming friends with her former enemies, even Twilight Sparkle, and friendly toward others. She also appears deeply repentant for her actions made at the end of the first film, referring to her altered self as a "raging she-demon". By the end of Rainbow Rocks, Sunset starts writing friendship reports to Princess Twilight using the book she once used to communicate with Princess Celestia.

In Equestria Girls - Friendship Games, while Sunset has managed to fully integrate herself into the group and able to take mentions of what she did in the past with good humor, she also harbors a fear of losing her school's newly gained trust, and she becomes deeply depressed when she believes she has let them down, despite their assurances. She also becomes increasingly irritated by her struggles to understand how magic works in the human world, briefly snapping at her friends at one point. When the human Twilight Sparkle endangers her friends, Sunset's anger explodes as she berates Twilight for meddling with forces she doesn't understand, taking her own frustrations and self-doubt out on her. However, she immediately regrets her harsh words and reaches out to Twilight in friendship by the end of the film.

Sunset's backstory is explored deeper in the comics. Here, it is shown she had a very troubled relationship with her mentor Princess Celestia, which explains her descent into evil (though she was already extremely arrogant, self-centered, and antisocial, thus her mentor's short patience with her). Sunset had previously appeared in the form of a toy and as a NPC in the MLP Gameloft game. In both versions, she was merely a neutral character and not a truly evil one. 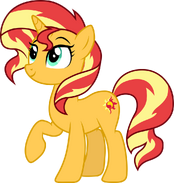 Sunset Shimmer as a pony

Sunset Shimmer in a cloak 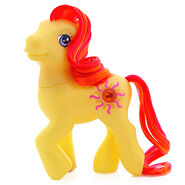 Sunset Shimmer as a villain in the first film 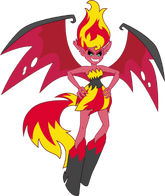 Sunset Shimmer as a Demon

Sunset Shimmer imagining herself as an Alicorn 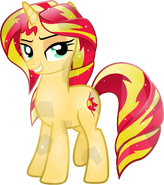 Sunset Shimmer as a Breezie 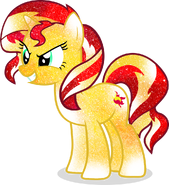 Sunset Shimmer with The Human Mane 5, Twilight Sparkle and Spike 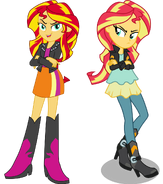 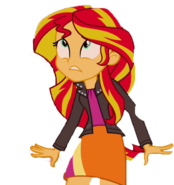 something's bad about to happened.

Sunset Shimmer with The Human Mane 5, Sci-Twi and Spike the Dog 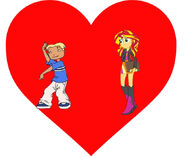 Sunset Shimmer in her Camp Everfree outfit from Legend of Everfree

Sunset Shimmer in her new outfit in Digital Series

Sunset Shimmer in her pajamas

Sunset Shimmer in her swimsuit

Sunset in her School spirit outfit

Sunset Shimmer in her festival outfit 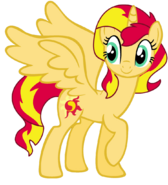 Sunset Shimmer as an Alicorn

Sunset Shimmer as a Mermaid (1)

Sunset Shimmer as a Mermaid (2)

Community content is available under CC-BY-SA unless otherwise noted.
Advertisement